In this guide to the types of chimney caps we share the different cap design options, styles, dimensions, materials, and their comparison to chimney flue caps. 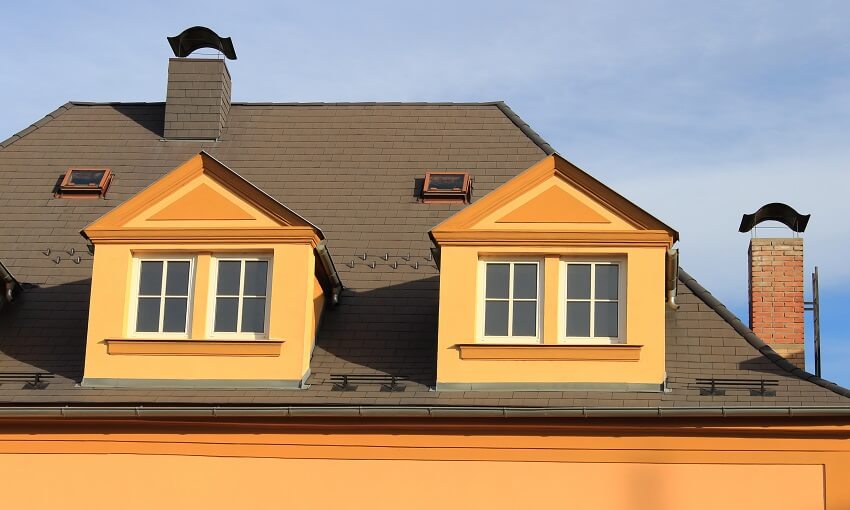 There are many kinds of chimney caps available. Each type of chimney cap is designed to meet a specific purpose. While a chimney can function without a cap it’s always a good idea to have one installed.

What Is A Chimney Cap? 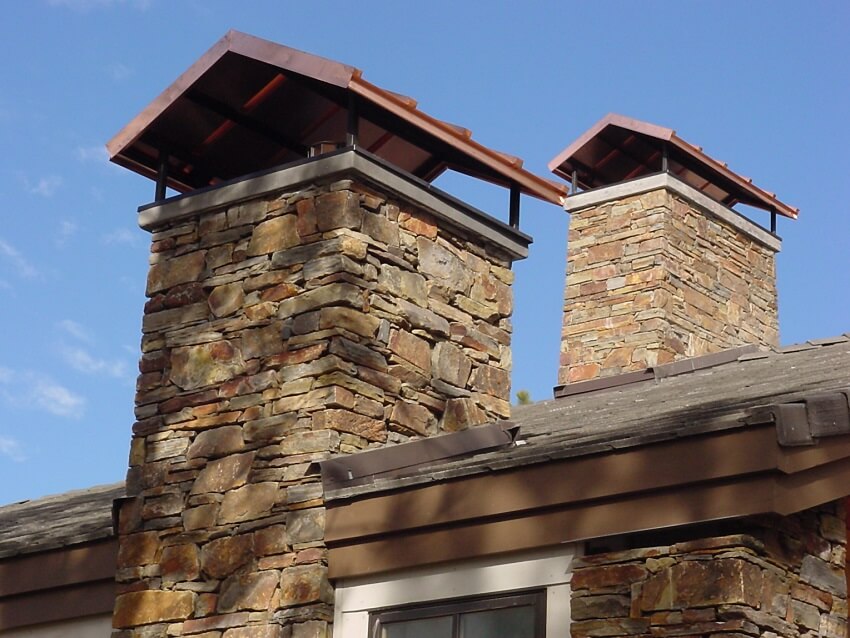 Chimney caps are an optional accessory used to prevent downdrafts and rainfall from entering your home through your chimney. They can also prevent sparks from spreading from your fire to your roof or nearby foliage.

A ring of metal mesh around the sides of the cap allows smoke to escape while also denying entry to pests. A chimney cap is used to cover the flue, or opening, at the top of the chimney.

Chimney caps are made from metals including copper, stainless steel, and galvanized steel. The material used affects the appearance and longevity of the chimney cap.

Chimney caps are manufactured in a variety of shapes and sizes to match any kind of chimney and may be rectangular, square, or round.

Chimney caps are available in a variety of different styles and designs. They can be purely functional and utilitarian, or they may contribute in some way to the overall visual impact of your home.

A chimney cap may even improve your energy usage and potentially save you money. When the temperature in your home remains stable, the heating and cooling systems don’t have to work as hard. As a consequence, less power is used, reducing your overall energy bill.

Downdrafts happen when a gust of cold air is pulled down your chimney, lowering the air temperature in your home. The solid top surface of a chimney cap blocks most downdrafts, helping prevent temperature fluctuations. 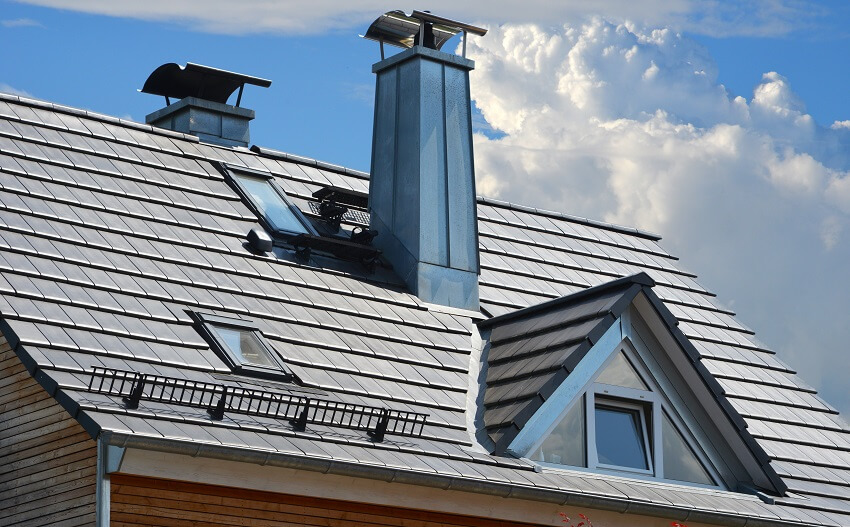 Here are the types of chimney caps you may wish to consider installing on your chimney. 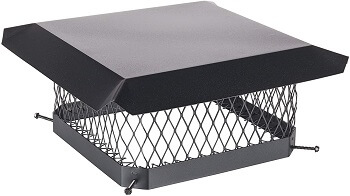 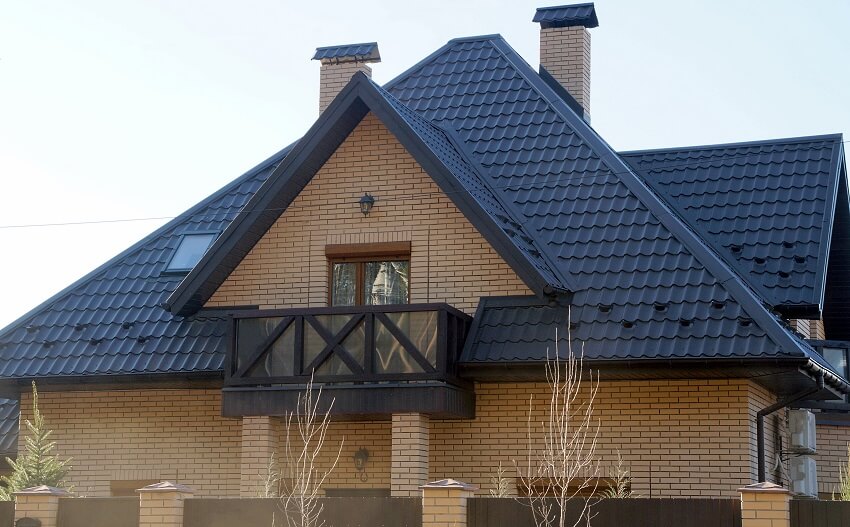 Another type of chimney cap commonly seen in residential construction is known as a high wind, storm, hurricane, or wind-resistant chimney cap.

Whatever you call it, this type of chimney cap features a double-walled ventilation design on the sides, rather than open mesh. The double-wall system is less susceptible to clogging and efficiently redirects winds away from the flue, even in extreme conditions. 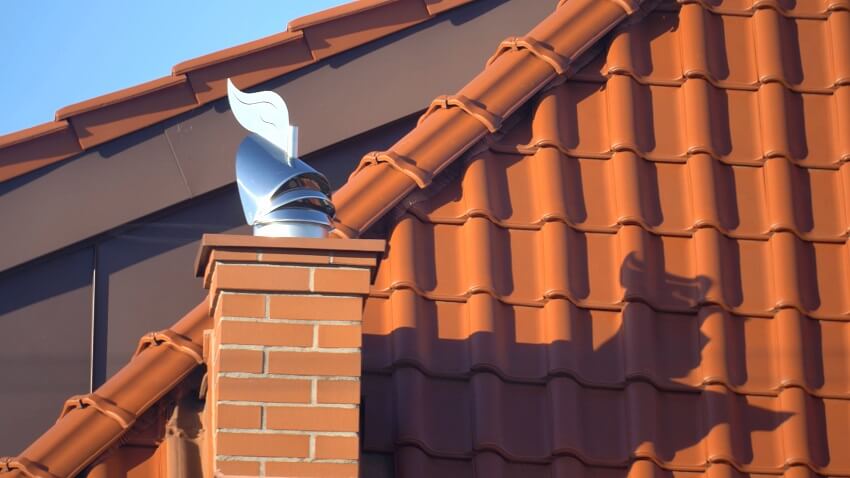 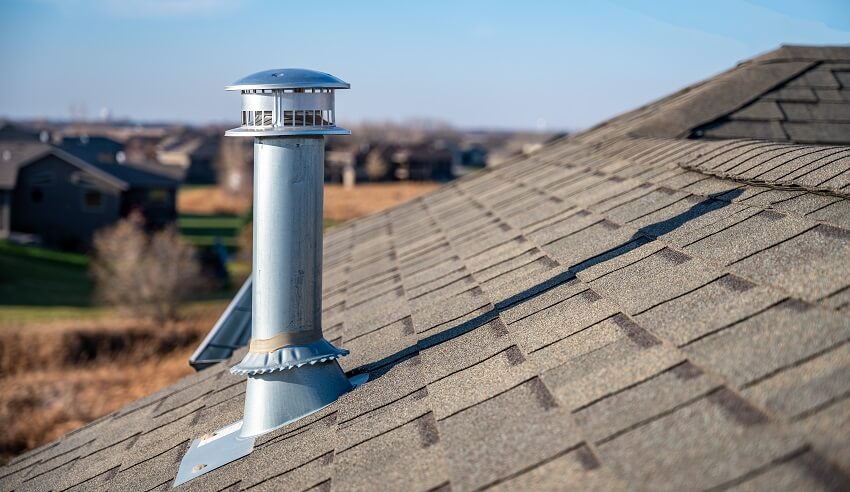 An electric draft chimney cap takes things a step further by adding an electric-powered fan. The fan may have several settings to help you customize the draw on your fireplace.

For instance, you could use a high fan setting while the fire gets going, then lower it to maintain a slower, longer burn. 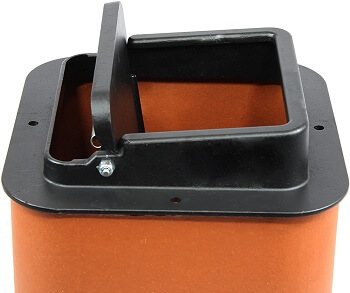 Today, most fireplaces and stoves contain interior dampers which can be used to block the flow of air in and out of your chimney when it’s not being used. If your fireplace is more than 70 years old, you could consider a chimney cap with an integrated damper.

With this type of chimney cap, you adjust the airflow at the top of the flue by raising or lowering an attached lever near the base of your chimney. 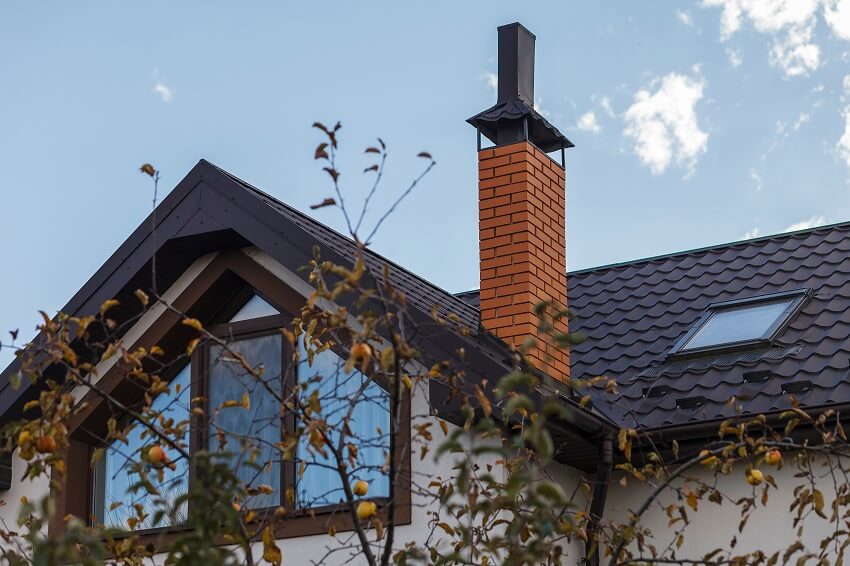 Chimney caps come in many different styles, from purely functional to fabulously decorative. They can also be custom-styled to fit your aesthetic.

Custom chimney cap companies often name the different chimney cap styles they offer to help customers distinguish between them. However, these style names are not necessarily standardized across the industry.

The sides of the chimney may be perpendicular to the ground or may display a curve or bend for decoration. 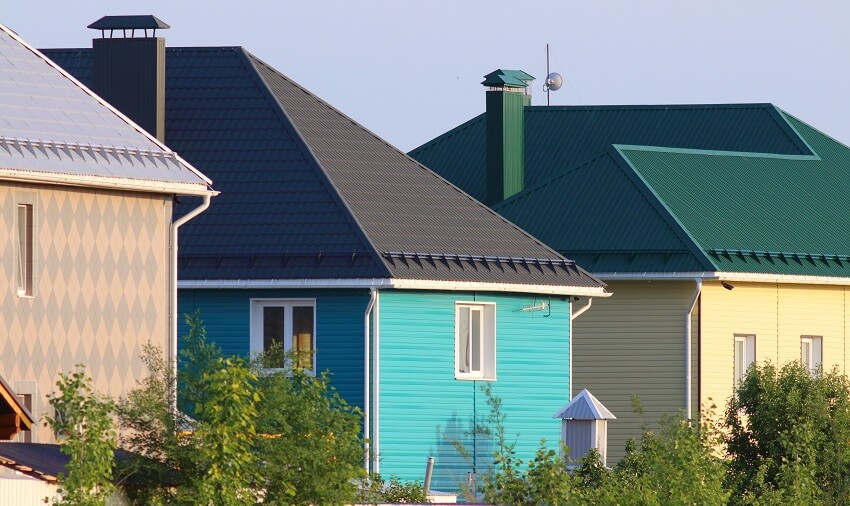 An important design consideration when making choices about chimney caps is the size of the mesh. The mesh must be compact enough not to allow debris or animals to get inside the chimney. However, it should not be so tightly spaced that clogs and ice become an issue

Homeowners concerned about the fire risks may choose to opt for chimney caps designed to arrest sparks, embers, and catch flaming debris. Spark arresting chimney caps have a double layer of offset mesh to protect against the escape of flammable material while still allowing air and smoke to clear.

The second layer of mesh can increase opportunities for the buildup of highly-flammable creosote, so it is especially important to regularly clean chimney caps that feature spark arresting design options.

Instead, they have a lower portion that slides into the chimney opening and rests on the crown. While a chimney cap of this style is convenient to install and certainly better than no cap at all, a strong wind can blow them away. For this reason, they are seldom recommended for long-term use.

The most important measurement for a chimney cap is its distance from the flue. Too little space between the opening and the cap may not allow for safe levels of ventilation.

To ensure adequate ventilation, it is usually advised that the bottom of the chimney cap (excluding the mesh portion) sit at least five inches above the top of the flue.

The average diameter of a round chimney cap ranges from six to 18 inches. Read our fireplace dimensions guide for more related information. 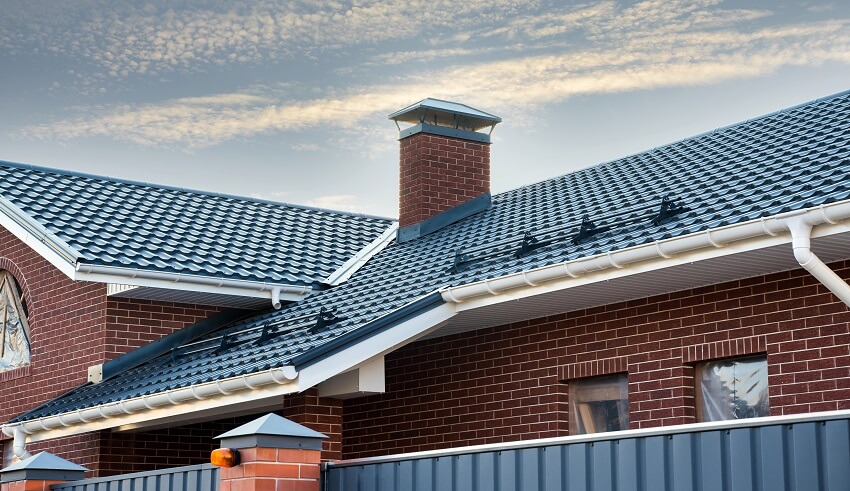 Chimney caps are made from metal. The metal used for fabrication changes the expected lifespan and performance of the resulting chimney cap.

The best chimney cap material for someone on a budget is a galvanized steel chimney cap. These types of chimney caps have the shortest lifespan, often rusting and requiring replacement after about five years. However, they are the least expensive type of chimney cap.

To achieve certain design goals, copper chimney caps are often best. Copper, like stainless steel, will not degrade over time and is not susceptible to rust. This attractive metal develops a highly desirable patina over time.

What Is The Best Type Of Chimney Cap? 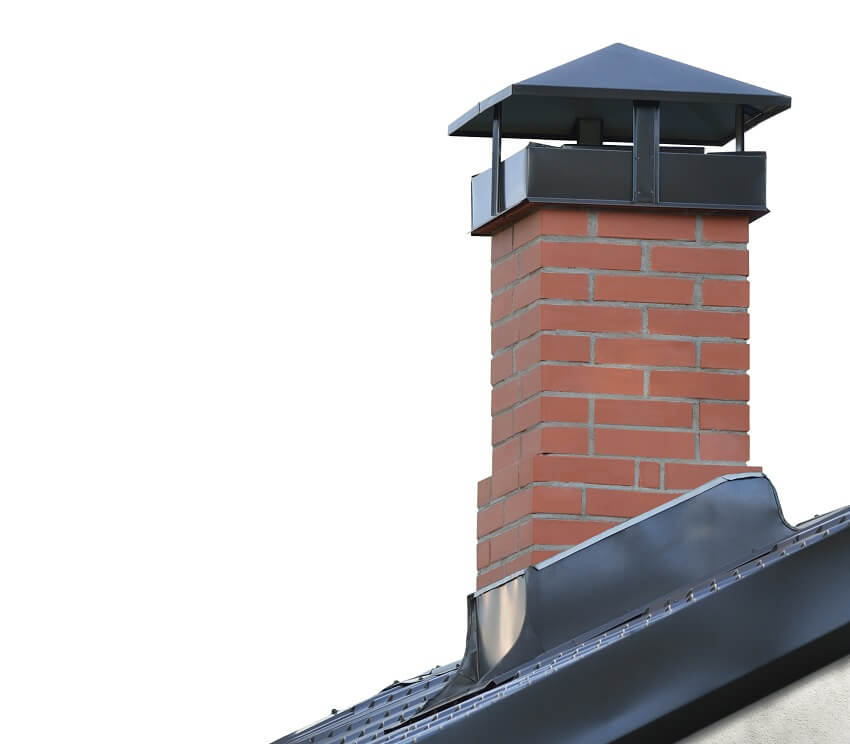 Any type of chimney cap, when properly installed and maintained, is better than no chimney cap at all. As long as you use an approved product and the installation doesn’t interfere with the ventilation of creosote and carbon monoxide from your home, capping your chimney is the right choice.

Keep in mind that the chimney cap you choose must be compatible with both your chimney and fireplace. See our guide to the types of chimneys here.

Many people believe that any fireplace or stove can be used with any chimney and chimney cap, but this is not the case.

If you have a gas or pellet-burning stove, the chimney, chimney liner, and chimney cap must all be approved for use with fires of that type.

A prefabricated chimney, for example, is made from metal and is paired with a factory-made fireplace. Prefabricated fireplaces and chimneys are only compatible with wood-burning fires.

A freestanding gas or pellet-burning stove can sometimes be connected to an existing fireplace chimney. But if the existing chimney and cap aren’t approved for use with gas pellet-burning fires, they may not appropriately vent.Read more about gas fireplaces here.

Improper ventilation could cause build-up in the chimney cap, creating a fire risk, or allow dangerous fumes to build up in your home.

It is always best to have a chimney professional involved in the measurement and selection of your chimney cap. Accurate measurements ensure a tight fit, allowing the chimney cap to efficiently perform its function.

Professional installation of chimney caps is recommended for all but the most expert DIYers. If you do choose to install a chimney cap on your own, at least have your work reviewed by a professional before you use the fireplace. 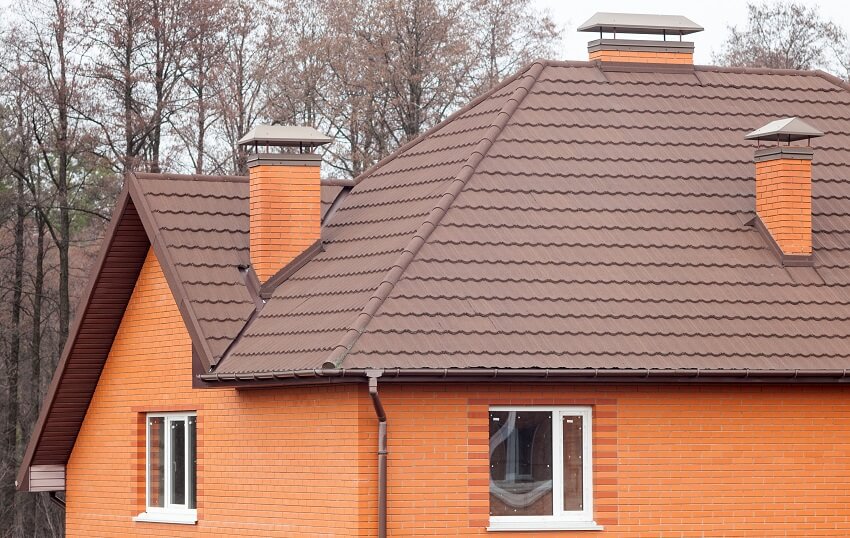 When water gets into your home through the chimney, it raises the overall humidity of your home, and could even encourage the growth of mold or mildew. Falling rain also tends to damage the chimney liner over time.

Chimney caps prevent these hazards by blocking or diverting most precipitation. In windy conditions, some snow or rain may still make it through the mesh sides of the chimney cap, but the overall amount of moisture should be significantly less.

The best chimney cap for rain is one that is tightly fitting, well maintained, and inspected annually. A professionally measured and installed chimney cap of any material will do a great job of keeping out the rain.

However, if the chimney cap is installed improperly or sustains damage after installation, water penetration may still occur. Make sure your annual roof inspection also covers your chimney cap to keep everything working properly.

If your area experiences high levels of precipitation, you may want to consider a chimney cap made from a material other than galvanized steel. Because galvanized steel is prone to degrading through corrosion, turning rusty when exposed to water and air, it’s not the best chimney cap for rain. 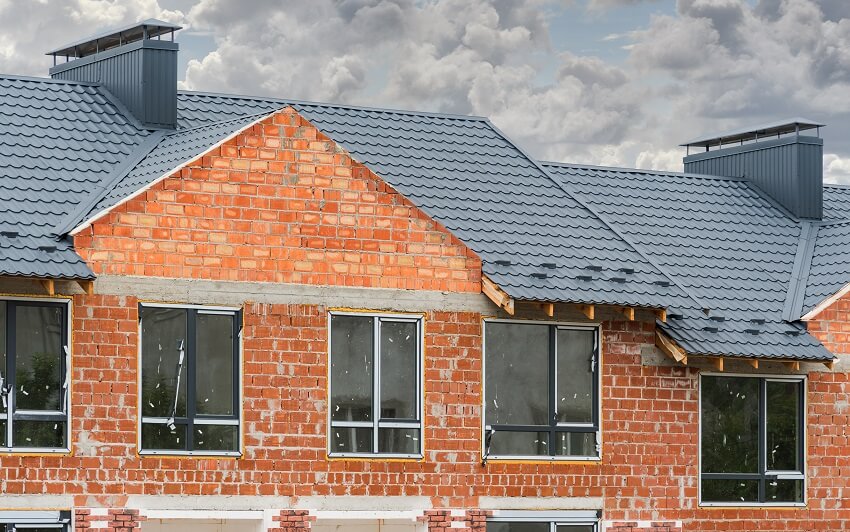 Chimney caps are sometimes confused with a different type of chimney cover called a chase cover or flue cap. Flue caps are larger than chimney caps and extend out over the sides of the chimney-top.

A benefit of flue caps is that they offer protection not only to the inside of the chimney but also to its exterior. Depending on the total size of the flue cap or chase cover, they may also extend protection to one of the most leak-prone portions of your home—the joint where the roof meets the chimney.

Chimney caps have a much more streamlined appearance than flue caps, as the solid cover is connected to the top of the chimney by metal mesh, giving a more cohesive look.

Both flue caps and chimney caps prevent precipitation from falling directly down the flue. Both kinds of chimney cover also reduce the prevalence of downdrafts that make your home chilly, dampen your fire, or fill the room with smoke.

Only a chimney cap with mesh sides can protect you from pest infestation in your chimney. Flue caps do nothing to prevent animals from entering your home through the opening in your chimney.

Because chimneys are warm and offer some degree of protection from the elements, they make an attractive nesting site for many birds. Bats are also fond of making their homes in chimneys. Mice, rats, squirrels, and raccoons are all animals that may find your chimney worthy of investigation.

The nightmare scenario is a wild animal in your house, but even if this doesn’t come to pass, it’s best to keep fauna out of your flue. Nesting material in your chimney poses a fire risk and needs to be removed before you can use the chimney. Relocating the animals safely is an additional area of concern.

Chimney caps alleviate all that potential stress by making sure critters can’t get into your chimney in the first place.

When you consider that the mesh also acts to contain and neutralize sparks, it’s clear that chimney caps offer superior protection to flue caps, whether inside or outside your home.

Visit our guide on what color to paint an exterior chimney and ventilation ideas like roof ridge vent for more related content. 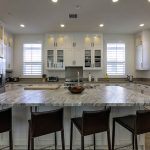