Here’s our solar panel sizes guide with residential & commercial solar panel dimensions, different types and the basic calculation for the number of solar panels you need for your home. 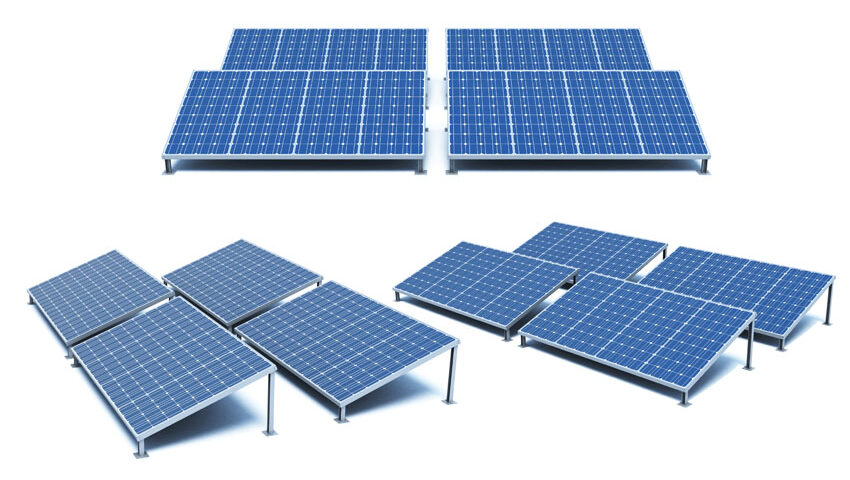 The voltage of a solar panel is affected by its size.  Both the voltage and the current can be increased when the cells are combined, and their product is called power.

The larger solar modules possess higher output watt ratings. The higher the rating is, the higher the solar power that is produced.

Residential solar panels typically possess between 250W to 450W depending on how efficient they are in converting sunlight into energy and the solar panel size.

Solar panels are available in a wide range of sizes, solar panel types, and total wattage. The standard solar panel size measures an average of 5.4 by 3.25 feet or 65 by 39 inches. This can cover up to 15 square feet of an area.

For commercial installations like in warehouses, you can find solar panels with measurements reaching up to 6 feet.  However, the variations can also change from one manufacturer to another. 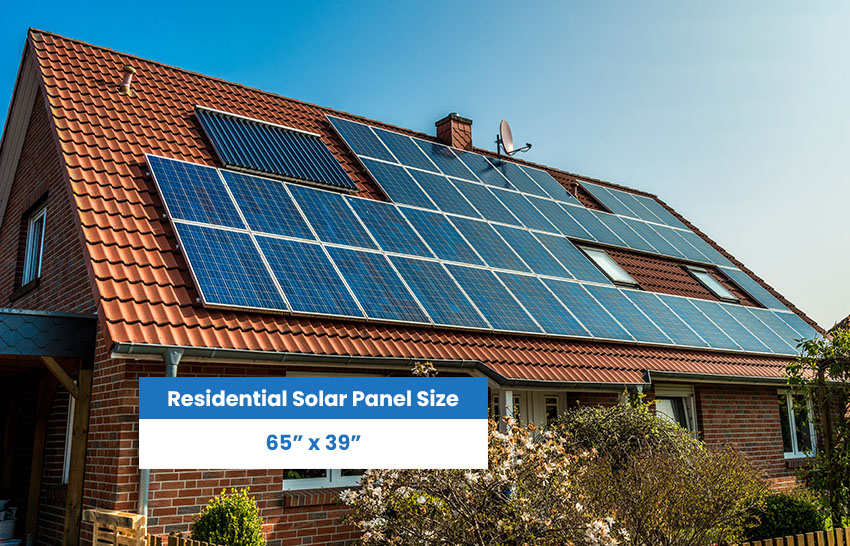 As mentioned earlier, smaller ones can measure about 5.4 feet by 3.25 feet or 65 inches by 39 inches, but you can also find those measuring 61.3 inches by 41.2 inches. Again, there can be size variation differences from one manufacturer to another.

But for the most part, these dimensions have remained for a long time. The only difference is the output and efficiency of the same solar panel size, which is determined by certain factors including the type of solar panel used in the manufacturing process. 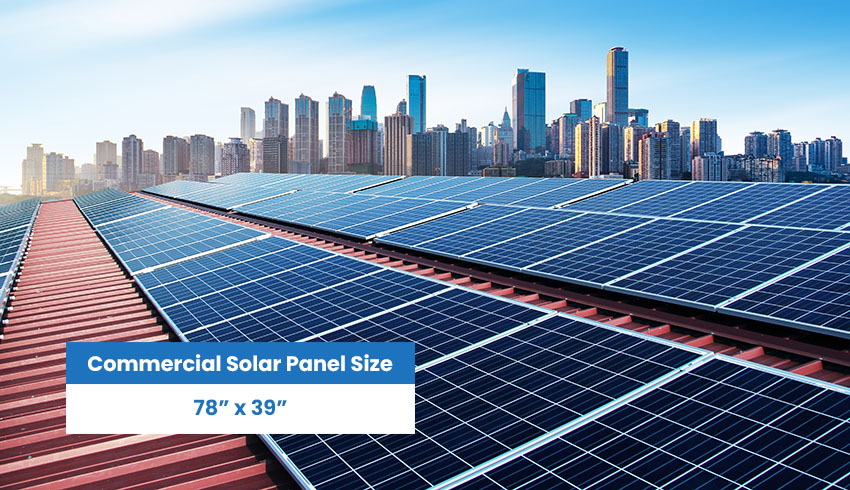 A commercial solar panel can measure 78 by 39 inches and have 96 cells overall. They can also weigh around 50 lbs. or higher. However, such specifications can also vary based on the type of solar panel or how it is made as well as from one manufacturer to another.

If you’re looking to produce more power and you don’t mind the weight and size of a commercial solar panel system, you might also consider installing it for your home. Nevertheless, commercial and residential solar panels are made using a similar process.

Every solar panel consists of photovoltaic cells (PV cells) measuring 156 by 156 millimeters or about 6 by 6 inches (Length x Width). Commercial solar installation is typically composed of 72 PV cells up to 98 cells or even more, while rooftop residential applications can be made with up to 60 PV cells.

The standard solar panel height is about 65 by 39 inches, but again, this measurement can be different from one manufacturer to another.

Number Of Solar Cells per Panel 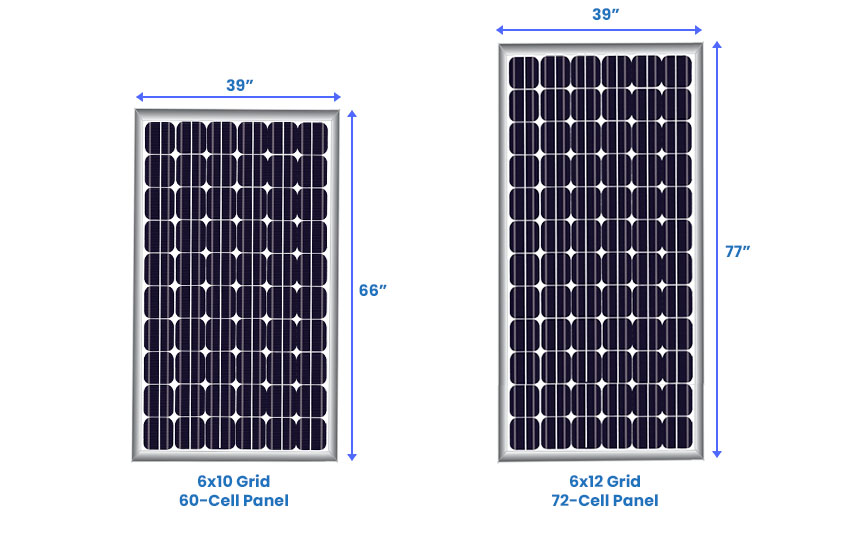 If you’re undecided between these two, you can take or give an inch on one of the sides of the panel because there can be a slight measurement difference as different frame sizes are also used.

How Thick Is A Solar Panel? 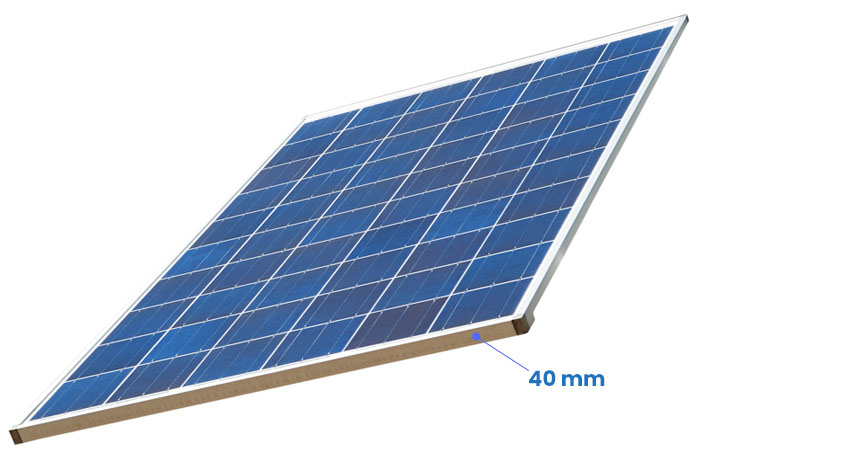 How Heavy Are Solar Panels?

Before installing a PV system, you must determine the suitability of your rooftop for it as well as if it has enough structural support for the PV panels.

Take note that the solar panels with the mounting equipment weigh approximately between two to four pounds per square foot. This is about 10 to 20 kilograms per square meter, which is an acceptable roof limit in many cases.

The installers, however, also consider the point loads because they want to reduce the total number of mounting locations to lower the risk of leakage, too.

On average, a solar panel system’s weight load, including the photovoltaic modules, hardware components, and mounting racks is from three to four pounds per square foot.

Fortunately, modern roofing systems can handle an average of 20 pounds per square foot, except older and damaged ones, which may have insufficient structural support and capacity for solar systems.

These silicon wafers are assembled to form a rectangular shape structure before being covered with a glass sheet and then framed together. But even if they’re made of silicon, monocrystalline and polycrystalline solar panels do not have the same type of silicon composition.

Lastly, there are thin-film solar panels. They’re made by depositing at least one layer of PV material on metal, plastic, glass, or any other supporting material. On the market are two prevalent types – copper indium gallium and cadmium telluride.

CIGS panels have four different elements, namely steel, aluminum, glass, or plastic, which are positioned between two pieces of conductive layers. And on the material’s front and back, electrodes are placed to capture electrical currents.

On the other hand, there is another type of thin-film solar panel, which is made from amorphous silicon. This type is similar to the monocrystalline and polycrystalline solar panel composition. However, it’s not made using silicon wafers but instead from non-crystalline silicon placed on top of supporting material, like plastic, glass, or metal.

TIP: Generally, a vast majority of roofs can handle solar panels securely and safely without you installing additional support. But to be safe, you should consult a structural engineer or an architect to evaluate the building’s structural integrity and the solar panel system to install.

Once they’ve given you the green light, you can have peace of mind that a PV system won’t damage or affect your roof’s integrity or increase the risk of leaks.

The standard module size for residential types is about 5.4 feet by 3.25 feet or 65 by 39 inches on average with each module containing solar cells, but commercial PV modules are a bit larger.   On average, the standard size of modules is 6.5 by 3.25 feet or 78 by 69 inches.

How Many Solar Panels Do I Need?

After learning about the standard solar panel sizes, their types, weight, and other factors, it’s time to determine the number of solar panels you need for your home or property.

A basic calculation to determine the number of solar panels needed is through multiplying your home’s energy requirement per hour by your area’s peak sunlight hours and then dividing the product by the wattage of the panel.

To establish a range, use a low- and a high-wattage. For example, 17 to 42 solar panels are needed to generate 11,000 kilowatt-hours per year.

But based on estimates, a home would need between 20 and 24 panels to supply 100% of its energy requirements. However, the actual number of solar panels needed would also be based on several factors, such as panel efficiency, geographic location, personal energy consumption habits, and panel-rated power.

For a system size comparison, let’s say it’s a 4-kW system size production and its estimated annual production is 6,400 kWh, then the number of solar panels needed is 12.

On the other hand, for a system size production of 14 kW that generates an annual production of 22,400 kWh, the total number of solar panels will be 42 solar panels. Both of the examples assume that your household is using a 340 solar panel.

But here’s a note. This can change depending on the panels’ efficiency. For example, the amount of space needed for the system and the number of panels to supply the electricity in your home will depend on the efficiency rating of your system because this will have to do with low or high power ratings.

But perhaps, a hard decision to make when thinking about the solar panel array sizing is to calculate your household’s annual energy usage.  This is because different products and additions in your home can significantly impact your household’s kilowatt-hour requirements, consequently affecting the number of solar panels needed.

It can be changed significantly if for example, you need to supply power to a heated swimming pool. That’s why you should consider the different energy-consuming products you’re using when getting the feel of how many solar panel sizing you need.

But aside from these things, the actual solar panel size should also be taken into consideration, like if you have an irregularly shaped roof or you have a small home.

For example, people with a smaller roof should be able to use only a fewer number of solar panels, but they can be higher efficiency models for optimal energy production.

On the other hand, those who own a larger home should buy larger panels to achieve ideal energy if they’re sacrificing some efficiency in the type of solar panel they’re thinking to install.

But maybe you’re also asking about how the size of your home may affect the number of solar panels you need?

Standard solar panel sizes have remained even some manufacturers offer variants. However, newer technologies used by different manufacturers have been using improved; thus, power output has also increased in the past years.

For example, some manufacturers are able to reduce the gap sizing between every panel, and still, the others are able to keep the solar panels tighter and more efficient with invisible framing and mounting hardware.

But to give you a quick estimate on how many solar panels you need based on the square footage of your home, let’s use some examples. 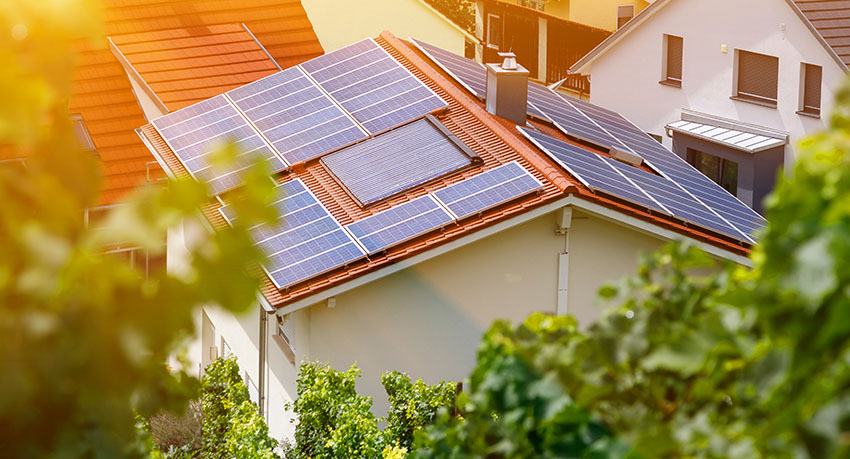 Another consideration when thinking about the number of solar panels you need, you should think about your common appliances and products in your home, especially if you have certain add-ons that will impact the solar panel system size you’ll install.

As a tip, you must be able to size the solar panel system as early and as accurately as possible before installing one through thinking over any of your expected add-ons or purchases, such as a central air conditioning system or an electric vehicle.

You must also determine the number of solar panels needed for certain appliances, such as hot tub, refrigerator, and so on.

To illustrate this, let’s use another example to answer the question on the number of solar panels needed for specific appliances.

So summing it up, you might also want to have a list of all your appliances and their electricity loads to help you calculate and eventually decide on the number of solar panels you need.

Visit our article about solar design software for more related content on planning and layout of your photovoltaic system. 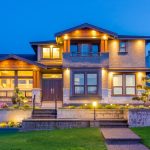 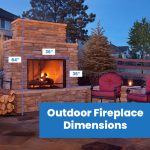