These are the plants that repel wasps including the different types, their advantages, the smell wasps hate, and other ways to keep these insects away.
You may have heard that aside from traps and the occasional burst with a garden hose, there are other ways to control the number of wasps hanging out in your yard.

These aggressive insects are attracted to a multitude of common backyard items, so keeping them at bay can be a bit of a struggle. However, there are a few more natural paths you can take to help protect your yard, yourself, and your local honey bees from wasp attacks.

What Types Of Plants Repel Wasps?

The types of plants that are insect-repellent in general are those with strong, pungent oils that release easily when leaves brush up against each other, or when a flying invader lands on them. They may not smell as strong to us, but to insects like wasps, they’re nearly unbearable to be around. Here are the best plants to use to repel wasps.

If you live in a climate where cedar trees grow abundantly, you may be able to use them in a strategic way to repel wasps. Cedar has historically been used to repel insects from home interior spaces, such as cedar closets .

It is even used in gardens to protect plants from pests. If you have cedar trees nearby, consider placing some fresh sprigs in bundles around problem areas where wasps tend to linger.

Mint is another classic natural repellent often touted for its ability to ward off spiders, termites, and even mosquitoes. Not only does it smell super fresh, mint also smells incredibly strong to small insects like wasps.

The pungent oil of this plant is enough to burn their sensitive systems, so wasps don’t typically like to hang around these plants. See the different types of mint on this page.

If you’ve ever had the misfortune of spilling lemongrass oil on your skin, then you know just how caustic this plant can be. Its oils are incredibly strong; just a gust of wind through its blades can invoke a strong lemony scent.

It’s this very smell that repels all sorts of wasps and other flying insects. Lemongrass is ideal for porches and patios, as it does very well in containers and raised beds.

Perhaps one of the most thoroughly-tested repellent plants out there is wormwood. This plant literally kills bugs, including those that live in the soil beneath the roots.

A main ingredient in some natural, plant-based insect repellents, wormwood is a great plant for keeping out anything that flies, stings, or bites. Wasps are no exception, either; a quick brush with this plant is enough to keep them far, far away.

Rosemary contains oils that smell appetizing and even therapeutic to us, but it has the exact opposite effect on bugs and wasps. Being a member of the mint family, rosemary is another culinary herb with extra benefits.

This plant is an excellent insect repellent; it can be planted in containers around areas where wasps are most problematic, and can tolerate bright sun with enough water. Rub the leaves to release an extra boost of high-powered scent.

One of the few plant celebrities of the insect-repellent industry, citronella is a natural enemy of the modern-day bug. During the warm months, stores stock their shelves with products made specifically from this plant.

This includes candles, oil diffusers, incense sticks, and even potpourri. While any of these options are available (and recommended), the live plant can also be found for sale at many of the same stores.

It’s not the plant itself, per se, that effectively repels wasps, but rather the vegetable itself that does the bulk of the work in keeping away those flying nuisances. Cucumber peels contain a very bitter substance that actively repels wasps.

It also acts on just about anything else that might try to come near you, save for maybe common house flies. Scattering cucumber peels may help save your backyard barbecue, but it’s not a great long-term solution.

What Smell Do Wasps Hate?

Wasps have a very keen sense of smell, which is an advantage for those of us trying to rid our yards and gardens of their presence. And since wasps can smell far better than we can, the same plants that we use in our cooking and in our gardens can be used against these angry flying pests.

The most effective way to repel wasps is by using some form of citronella in the areas where they tend to congregate. By using citronella, you can deter them from both visiting and colonizing in your yard.

Citronella can be found in a variety of products, but it’s most commonly used as an oil burned in a tabletop or ground stake torch. If fire’s not for you, there are also wristbands, diffusers, and even sprays that can be used to target problem areas.

The most natural way to use citronella in your yard (and for an endless supply) is to purchase live citronella plants and grow them in containers or straight in outdoor herb gardens to deter wasp populations. They’re very easy to grow, and are sold as immature plants, potted, and ready-to-go hanging baskets.

Alternatively, wasps are known to hate the following plants which have odors that are offensive to them. These include spearmint, peppermint, cloves, thyme, eucalyptus, lemongrass and basil. Adding these plants to your garden may help prevent wasps from forming colonies nearby.

What Plant Do Wasps Hate The Most?

Arguably, citronella is a clear winner, but there are a few others that are most effective if you plan to plant them in large quantities. Some can even be useful to other insects that aren’t as aggressive or destructive, including honeybees, moths, and other pollinators.

The best plant for large-scale planting is peppermint, hands-down. It grows quickly, spreads like wildfire, and effectively repels wasps, spiders, snakes, termites, and caterpillars. Plant one peppermint plant in a garden, and it will need to be trimmed back constantly throughout the growing season.

Other Ways To Repel Wasps

In order to stop the seemingly open invitation to all wasps in the area, you need to consider other factors that may be drawing them to your yard aside from your garden.

Wasps are attracted to all sorts of commonly overlooked backyard circumstances that could act as a calling card to the whole colony.

Here are some tips for repelling wasps from your yard.

• Make garbage and refuse inaccessible: Wasps aren’t just after your flowers; they want in on your garbage, particularly any meats or fermenting foods that may sit in your bin before it’s picked up. Keep the lids on any trash bins you may have around sealed shut, and try to keep the outside and inside of the cans clean and free of that signature kitchen trash smell that wasps love so much.

• Limit brightly-colored decor and furniture: Wasps, like many insects, are also attracted to brightly colored plastics and certain types of outdoor furniture with fabrics that may look promising to an unsuspecting insect.

Most wasp traps, in retrospect, are colored yellow to attract their intended victims; you’re doing the same with plastic pots and decorations that are yellow, pink, red, or white. If you can’t get rid of these items, try moving them to a corner you aren’t as likely to frequent.

• Avoid stagnant water sources: To a wasp, a puddle of water is a huge break. Your bird bath might be contributing to your wasp infestation, which is a constant, reliable source of water to a colony of wasps considering taking up residency in your yard.

The same goes for ponds, pools, slip n slides, and pretty much any other water feature that allows water to sit still. Try adding solar-powered pumps or fountains to bird baths and ponds to disturb the water’s surface, which makes it harder for wasps to access a safe drink.

•  Destroy the source of wasps – If rearranging your yard and planting repellent plants isn’t working, it may be because there’s already a colony somewhere on your property or on a nearby neighboring property.  In some cases, it might be necessary to enlist the help of your neighbors to determine the source of the wasps. You can even arrange for everyone in your vicinity to try using traps.

While not every situation warrants an exterminator, anyone with bee allergies or a honeybee hive may consider it as an option higher up on the list.

In nature, wasps serve an important role in their ecosystems; after all, they are pollinators, and they are responsible for helping to clean up natural waste like fallen fruit.

However, they’re not so necessary in our yards that we actively maintain. Keeping them out in nature and out of your yard can be as simple as planting a few choice herbs, which can be aesthetically appealing, useful, and maybe even fun.

See more related content in our article about plants that repel bees on this page. 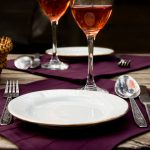